My mind has moved into 2021 as I start to plan my next adventures. But my body had been struggling with 2020 pandemic workout options.

That is until I discovered the Oculus Quest 2 Virtual Reality Headset. My son-in-law introduced me to it and I knew immediately that I needed to have this technology. The opportunity to immerse yourself is another place such as a good backpacking trek totally justified the purchase. Then I explored some exercise oriented apps and decided to buy a 1 year subscription to SuperNatural.

So this is my short post about how the Oculus 2 Headset has allowed my Adventures to Continue. The YouTube VR Library is growing with some really great 360 videos. Plus there is Oculus TV which gives you many options to travel around the world. But then I explored the exercise option and realized that this VR thing could be the answer to the exercise motivation needed to keep my old body ready for the live adventures. I have never participated in any organized exercise program. I don’t do yoga and I have never joined a health club for exercise. But this SuperNatural App made exercise enjoyable and I have selected a few coaches who I like and my body is truly starting to experience the rewards. The concept of hitting black and white balls coming at you with virtual bats along with squatting under triangle barriers also coming at you is good. I decided to write a post after ending a session where I worked out on the surface of the moon as well as at my favorite backpacking location of Tom, Dick & Henry Mountain. The technique of placing you in a beautiful setting hitting balls and squeezing under virtual tunnels gives your body a complete workout. You can work up a sweat with a good 15 minute session and you definitely have to push yourself to finish the longer sessions. Here is the SuperNatural Promo Video:

This Virtual Reality tech is not entirely new to me. As a CIO in Higher Education I have watched the progression of the VR Technology. In the early days a team of many developers would spend months to develop an immersive experience on the high priced Oculus headset of the day. But now VR’s time has arrived and Facebook’s purchase of Oculus is a part of it. The Headset is relatively affordable now because the money is going to be made off the apps. This is just the next Playstation or XBox. BTW – my right arm is a bit sore from playing so much Table Tennis on the Eleven app.

Update 6 weeks later – still very positive. I have been meeting my goal of working out 4 times a week and I am seeing amazing improvements with strength and flexibility. I don’t worry to much about points, I realize that just doing the workout is a victory. The thing that bugs me the most is when I hit a ball with the wrong colored bat. I think the mental exercise aspect of the workout is as important as the physical. I think the combination of exercising and then getting in the Hot Tub is great for the body. I have always had low back concerns and now I feel so much more confident. I can’t wait to hit the ski slopes or the backpacking trail to enjoy what this old body can do.

Update 12 weeks – still going strong. This article from CNN captures my experience accurately. Tomorrow I head out for a 4 or 5 day trek on the Lost Coast Trail which will be my first opportunity to gauge my fitness progress from Supernatural with the demands of backpacking. Overall my Supernatural journey has been all that I could have imaged from an exercise program, but most of all it provided the motivation to “Just Do It”. I have progressed steadily to harder sessions but have also realized that I need to pace myself. My streak of 11 weeks meeting my goal will end this week.

Providing Technology that Students Actually Use

While eating lunch at my desk I opened up the webcam view of our new Nonavitra 6K Visualization Wall we built for use in the library. Three students jumped on the system and proceeded to spend 15 minutes exploring chemical bonding options starting from some periodic table application. I wouldn’t say that it was utilizing hi-res graphics but what was important is that the students were having such a great time exploring. This brings me to what I feel is one of the most important reasons for giving our students access to this visualization resource. The opportunity to explore and gain experience in working with resolution that is typically reserved for corporate showcases or expensive research facilities. 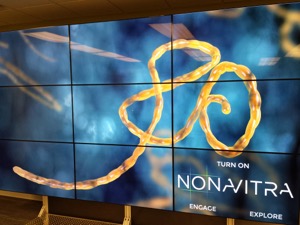 The library had an open house a few weeks ago where they introduced Nonavitra and ever since we have seen the reservation schedule for the resource fill up with student groups especially in the evening. In fact one of the first uses for the wall was the rugby club using it to scout a future opponent. But what I love is that student study groups are reserving it.

In the beginning my Research Support team started bugging me to allow them to build some sort of a visualization facility. They wanted to build an immersion visualization experience reminiscent of CAVE2 at the UIC’s Electronic Visualization Laboratory (EVL). And yes that would be fabulous but we need to walk before we run, which is why user adoption is the overriding requirement. Last year’s V4DiR focused on 3D data review and the Nonavitra Visualization Wall now allows us to put a powerful visualization resource in the hands of our faculty and students. The one condition that I set was that I would not build a visualization resource that would become relegated to providing campus visitor demos. We seem to be having success with these technology rollouts. The 3D Printer program in the library has been extremely successful. The secret to success is to put your effort into engineering the business process for making the resource available.

3D Printing for our Students

We have just pulled the trigger to offer 3D Printing to all of our students here at Missouri S&T. It was not difficult to confirm that 3D Printing is about to explode in use and availability so what better venue to make it available then at a university full of engineering and science students.  Plus I have faculty who are renown for their work with 3D printing or Additive Manufacturing as they call it. They have provided me with the advice I needed to select the appropriate 3D printers for student access. 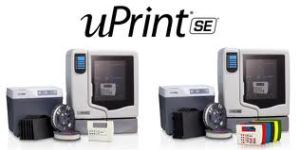 I will write another post when we open our new 3D printing service in a few weeks but for now I will give you the basics of our plan. We bought 2 Stratasys uPrint SE Plus 3D printers, the same models that UPS just ordered for their leap of faith into this business venture for their select stores. We will place these printers in our library print media area where we can manage them with IT tech support students. We have a lot to learn about the business process but it appears we can let our students pay for the objects printed with their PaperCut account. All the students need to do is submit their 3D drawing file and the uPrint CatalystEX software will help us to choose the most effective positioning and calculate the materials cost. We have a regular and an ultrasonic washer with a good sink area for cleaning off the lattice support, so here we go. The goal is to make this printing available to everyone at the most affordable price. We know that the increased access to the printers will be beneficial to our engineering design classes and I am hearing that it will be invaluable for supporting our graduate student researchers so I am hopeful that this will turn out to be a wise decision.

Will 3D Printing Change the World?

Posted in IT Support, Library, Multimedia