Jakob needed more time to rest his foot so I set out to complete the Great Crossing segments 4-5 which is Vikjorda connecting with Lake Store Krenggårsvatnet and on to Leknes. 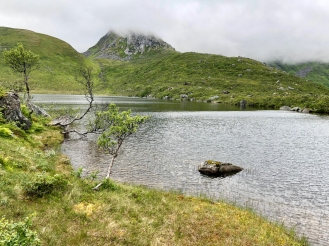 This was a 2 day trek which I was giving myself 3 days before meeting Jakob in Leknes. The trail starts our at Rebecca’s Cafe on highway 815 which unfortunately does not appear to be in operation any longer. The early kilometers presented a gentle climb around a lake before you are presented with the task to reach the ridge above, however, there is no trail so you choose your own route.

This was not difficult which is probably why no trail has evolved, however, a GPX route was important.

Climb to ridge on left with no trail

Once up on the ridge you rediscover a trail and work your way toward the peak of Dalstuva which is 534 m. I was prepared to crossover, however the peak was in a cloud so I opted to setup camp before the ascent. There were not many flat spots to setup a tent but the ground cover was a lush mossy bed which made for a really comfortable bed. All was good, the weather was not great but no rain. 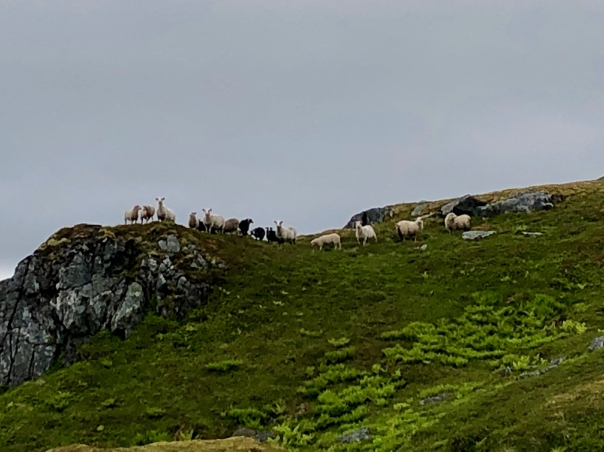 These guys were wondering why I was there

I could hear the sheep bells in the distance but the next morning about 15 of them were perched on a ridge nearby wondering what the heck I was doing on their mountain.

Looking back as I Climbed Dalstuva

Trail up Dalstuva Looked Good for a While

The morning brought clearing of the cloud over Dalstuva so I headed up the peak. I was close to the top at about 10:00 am when the clouds came back and I found myself in a bit of a whiteout.

The trail was narrow and rather dangerous so I really could not proceed without visibility especially with an even steeper descent. So here I am about 50 m from the summit and I am stuck waiting for the cloud to clear. And it never did, so after a few hours of hoping and hopping up and down to stay warm I decided to be smart and just turn around.

This meant I would have to hitch hike to somewhere but it was better to be safe then sorry.

Serious Backpacker, Grandfather, Volunteer, Advisor, Mentor and still Technologically Aware Greg retired as a technologist who served as a Chief Information Officer in Higher Education at Western Washington University, Missouri University of Science, Technology, George Fox University and the Purdue School of Engineering and Technology at IUPUI. Prior to the IT career in Academia, Greg was a Systems Consultant with Hewlett-Packard. Other early jobs included IT activity in the oil shale and coal mining industries along with owning a computer store in Steamboat Springs, Colorado.
View all posts by ghsmith76 »