1971 National Geographic Article on the PCT 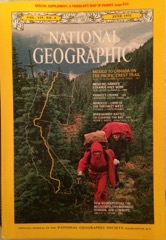 My wife was visiting friends of ours in Oregon, mentioning to them that I was interested in backpacking on the Pacific Crest Trail, PCT. They quickly went down to their basement to return with the June 1971 edition of National Geographic that has a story on the Pacific Crest Trail. This is fascinating for many reason, the opportunity to read about their impression of the PCT in 1971 and the side benefit of being reminded by the magazines ads as to what was popular then. I loved Bell Telephones ad about providing emergency phones on a desolate stretch of Interstate 80 in Pennsylvania. However, the real treat was the article.

In 1971 the PCT was only about two-thirds complete as it had only been fully commissioned in 1968 (Public Law 90-543) in the establishment of a “National Trail System”. On October 16, 1970, Eric Ryback, an 18-year-old student, completed the first PCT thru-hike which probably stimulated the article. The writers definitely spent some time on the PCT and did realize the awesome gift that was being created for the outdoor enthusiasts.

The article itself allocated a lot of focus on the environmental pressures of the time such as the threat from smog in the LA basin or the over use of the PCT due to improved accessibility. So from a comparison 44 years later it is encouraging to know that the high ozone levels in the San Bernardino mountains did not kill all the trees and that wilderness use management has done a good job protecting the natural beauty of the PCT. Forest fires were of great concern back then as well. Significant credit was given to John Muir for educating our country about the value of this wilderness. And various mountaineers were recognized for helping to chart this trail. This was a treasure of a gift from the Chegwyn’s of McMinnville, OR.