Our first segment or day corresponded to the Great Crossing’s first day which was to cross over Matmora Mountain from Delp to Sandsletta. We did have to add a few km due to hiking to the Delp Trailhead from Laukvika but the trail was well marked and my Lofoten Adventure had begun. I quickly realized that the trail tended toward difficult since it essentially went straight up, no concept of switchbacks in Norway. Soon we were greeted by the local free range sheep who had deposited many poop landmines along the trail.

The trail started out in a steep climb up to about 400 m where the first summit flattened out with fantastic views to the South, West and North.

A large cairn marked this first plateau where we signed the log book. The trail then stretched out over ridges and shoulders before the final accent to Matmora.

At the summit we got our first 360 view out over Austvågøya Island. Overall the weather was excellent but we did need to pull out our backpack covers for a short rain storm. 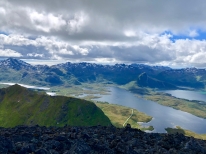 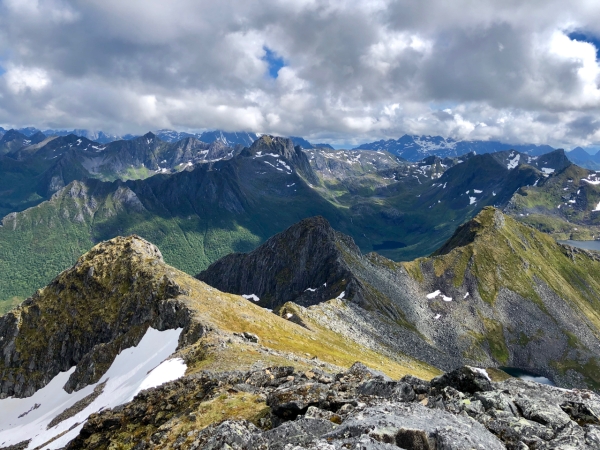 The trail down was steep but dependable and the lower areas were drier then we expected.

The hike to Sandsletta was not bad at all.