My Dog is Complicated

My dog Brook, @AussieBrook, and I just returned from a perfect backpacking overnighter to Tom, Dick & Harry Mountain. The weather was perfect thanks to a temperature inversion that kept the Portland area under a blanket of fog. This was important because I really needed to give Brook a positive backpacking experience since our early summer outings had soured her on the whole backpacking thing. You see, Brook, an Australian Shepard, is complicated. She is a typical Aussie in that she wants to herd, protect and keep me aware of everything.

She is 4 years old and has been backpacking with me for 3 seasons. The problem relates to how Brook will totally sacrifice her own comfort to ensure that I am protected. This translates to her only sleeping outside and typically finding a strategic vantage point from which to keep watch through the night.

Frankly, I would rather she slept in the tent to help keep me warm, but I do appreciate her concern. However, as I mentioned, Brook is complicated. I have never had a dog that I needed to negotiate with. This year those negotiations centered around her deciding that she did not want to backpack with me. This objection relates first to the fact that she hates to ride in a car, I think this relates to her not having control of her environment. However, the real objection arose from our early season treks where she was the victim of some really bad weather. The photo above is from an overnighter to Ramona Falls in early June to investigate the Sandy River crossing in preparation for an upcoming Timberline Trail Trek with friends.

On that Timberline Trek Brook showed her disinterest in the overall trip but cooperated just fine until the weather deteriorated. After we got hit with a snow storm, Brook disappeared by positioning herself back up the trail letting us know that she was done. In this negotiation with her we agreed to end the trek. Back home when I was preparing to go on my Lofoten Norway adventure it was obvious that Brook wanted nothing to do with it. This was OK at the time because Brook was not invited to Norway or the later Colorado Trail treks, so essentially Brook got her wish and had the summer off from backpacking. Since returning home I have been looking for an opportunity to take Brook on a positive outing. I even purchased her a new winter jacket to help get her through those cold nights.

Well our recent overnighter to TDH mountain was all that I had asked for and better. From my perspective the view from TDH of Mt Hood and the many other mountains to the north is a backpackers treat. 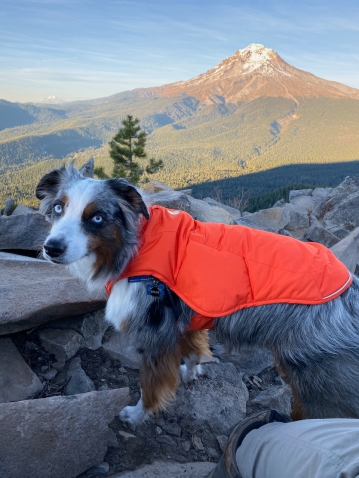 Clear skies is a must but getting comfortable temperatures in November was more then I could have hoped for. We made it to our campsite around 4 pm and setup camp in preparation for darkness to hit early. As the sun went down it got really cold, probably got to 38 but the breeze was out of the west and it felt good. Brook ended up laying next to the tent close enough to be laying next to my legs. Again, I would have loved to have had her in the tent, but at least she was staying close. The first time I got up I could tell the temperature was rising, it felt great and I could tell that Brook was also happy with it. She hung out next to the tent until about 1 am which was a real positive. Overall she seemed very happy at sunrise and showed her appreciation with many kisses.

The morning was spectacular with an awesome view of Mt Hood. Brook had a wonderful time terrorizing the local squirrel population as I enjoyed a leisurely morning taking in the view.

I think Brook may be mellowing a bit in her objections to backpacking, but I will make sure that our next outing, probably next Spring will be a pleasant one for her.

However, I leave this trek with a concern. I do not think I have ever seen so little snow cover on Mt Hood. 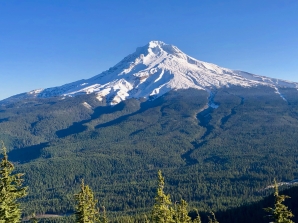 These views of the south side of the mountain are from 110519 and 110818. The problem is not a lack of snowfall but more rapid melt-off due to higher temperatures.

I got my first dog when I was 8 years old. A year later I was old enough to take over my brother’s Indianapolis Star paper route in Lafayette, IN.

Her name was Cindy and she was a beautiful border collie with long flowing black and white fur. From the beginning we did everything together so I had no concerns about letting her accompany me on my paper route. I remember I used a to whistle to alert her to come back, but for the most part she was fairly free to explore the neighborhoods around Kossuth and 7th street. But tragedy struck one morning when she was hit by a car and died in my arms. Maybe the saddest experience of my life, because even now it is difficult to write about it.

I had to deal with all of this by myself, my parents were out of town and had left me at home probably with my sister and brother in charge. Actually, I think it was the first time my mother had accompanied my father on a business trip to Southern Indiana. As I sat on the curb with Cindy dying in my arms one of my paper route customers came out and quickly interpreted the situation. I did not know these people but they provided the adult support that I required. I don’t remember much about the rest of that day, I’m sure sadness overwhelmed me. My parents were contacted and then immediately headed home, but they would not be able to get home until late that night. The people who helped me that day coordinated everything which included giving me a new puppy that looked just like Cindy. I do remember my parents waking me up when they got home finding me sharing my bed with my new puppy, Cindy 2. 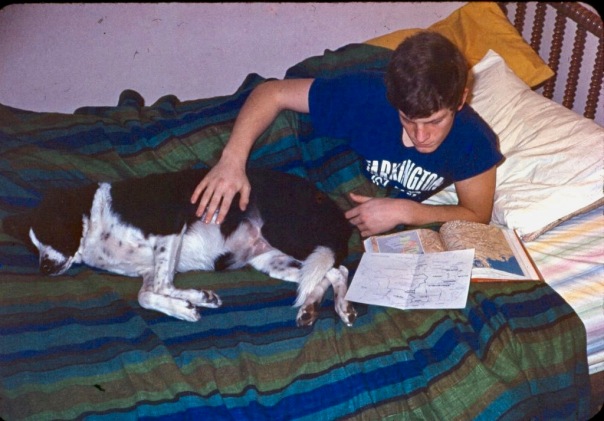 Cindy 2 was my constant companion growing up

I finished growing up with Cindy 2, having to say goodbye to her when I left home after college.

My next dog was rescued from the Boulder, CO, humane society.  We went to the pound and selected the calmest dog amidst a kennel of barking dogs. Rusty turned out to be a great dog. We gave him a vasectomy per regulations to adopt but we later had to get him spayed do to his strong Libido. Rusty did backpack with me. One memory that stands out was near Flaming Gorge when Rusty was asleep near bushes in our campsite when he was sprayed by a skunk. Needless to say that was a difficult night for both of us.

Abby was my daughter’s dog but eventually became my backpacking buddy. We never got to do any extensive backpacking as her health was failing when I got more time to go into the wilderness.

But instead I found myself starting off with my dog history and next thing I know I found myself writing about my childhood incident that turned out to be very difficult to relive but probably therapeutic. Who knows maybe dealing with such sadness all by myself at such a young age shaped my personality.

I am returning from a business/pleasure trip to Phoenix so I had to put Brook in a kennel. This time I realized that I had some separation anxiety when I dropped her off. This is not normal for me but our relationship has grown to be very close. I am really looking forward to years of backpacking adventures with Brook.