Puppy Brook is growing up and I took her on her first backpacking trip this week. She did great and I’ll share some of that in a bit. But any baby growing into adulthood is an incredible experience. Sure it is a lot of work but also a rewarding experience. Brook is our 3rd Australian Shepherd so it is interesting to compare but also helpful to know what the breed tends toward. An Aussie is primarily interested in serving her master which historically has meant herding their flocks of animals. So raising an Aussie does mean that you break them of that herding instinct especially with the neighborhood kids. Aussies will learn whatever you want them to, but their independence is also very important. Right now I am tempering Brook’s need to be the protector with the social requirement for her to be friendly. This is the critical artistry of parenting a pet. 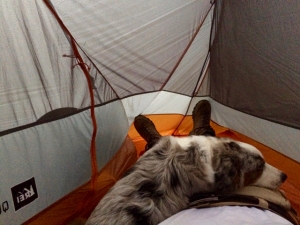 Riding out a Thunderstorm

Our backpacking trip was a simple overnight on the Opal Creek Trail near the north fork of the Santiam River east of Salem, OR. This is an easy hike highlighted with typical Oregon majesty. Brook’s trail etiquette continued to be outstanding, but that is really built from her Aussie traits. I was really wondering about canine backpacking issues like staying on the trail, crossing narrow tree truck bridges and ignoring forest wildlife. And of course the critical test for how she would handle sleeping in the forest. An additional test of how she would handle a thunderstorm greeted us first as we barely got the tent setup before the storm hit. I was not real happy with how I had to rush the setup of the t

ent, but it provided shelter in the nick of time. Brook immediately had to decide whether going into this tent was acceptable but quickly realized it was fairly cool hanging out with her master in such a confined space. This may have turned out to be the most valuable lesson most of us dog owners deal with. How does your dog deal with thunderstorms. Most of my previous dogs have gone berserk during a storm. However, during this storm Brook was so happy hanging out with me in the tent that she had no reason to fear the loud thunder. I may finally have a dog that can deal with thunderstorms. Awe yes, but then there will be the fireworks test someday soon.

The overall backpacking experience was perfect. Brook initially did not want to cross narrow log bridges. She was nervous about all bridges but if they had rails on both sides she could handle it. She does seem a bit reluctant to explore streams, I kept telling Brook that the best drink is from those babbling brooks. She did want to sleep in the tent but that worked out OK since she did not get overly dirty or wet. She would go out into the night for a drink and things but she did not waste much time staying away from the tent. In the morning she did get a bit spooked by all the birds serenading us, but that was quickly forgotten when she discovered how much fun it was to run up and down all the little trails around the campsite.

The major problem Brook is still dealing with is riding in a car. She does not prefer to do this, however, she does not have a choice in this matter. This trip was extremely valuable lesson for her, even with the throwing up in the car. She will be able to handle car travel, but I don’t think she will ever desire it.

April 30 I will be backpacking the Wild Rogue Loop in southern Oregon. Unfortunately Brook will not be accompanying me due to the presence of poison oak and ticks in the area.