The Lost Coast Trail has become my early season getaway, but the year since Conquering the Lost Coast Trail in 2020 fueled a highly anticipated return. Permits for the LCT have become more coveted so you select your permit far in advance and hope for the best. This year’s permit was for February 18-22 and the weather appeared to be acceptable, however, rain was in the equation. We decided to do a Yoyo down and back from Mattole to avoid the brutal shuttle road over to Shelter Cove. I had my normal concerns about my now 66 year old body, but I also was highly interested in how my new exercise routine, Supernatural on Oculus, might enhance my backpacking experience.

This year Bryce and I welcomed Jeff, an experienced Wilderness Recreation Professional, to join us and the 2021 Trekking season was launched complete with Rainier Jubilee Beer. I do believe Jeff thanked me for the invite more than 100 times throughout the trek. We arrived at Mattole Trailhead at dusk on the 17th and found a spot to camp on the beach. Thursday was known to have rain in the forecast so we were grateful for every hour we got before it hit.

Low tide would occur around the middle of the day making for great flexibility, but the weather would dictate our progress. The Elephant Seals were strewn across the Punta Gorda Lighthouse stretch but they rarely emerged from their slumber. I’ll use the video below to document the Seals.

We were not making great time once we got on the trail, I think we knew that the weather was not going to cooperate to allow us to venture past the first tidal zone, so we enjoyed a leisurely stroll. It started raining around 2 pm and the wind out of the SW appeared to be an issue so we were looking for a campsite with a wind break. We ended up choosing the green knoll just as you enter into the overland section past Sea Lion Gulch.

We were able to get camp setup as the rain became more significant. By 4pm the rain had forced us into our tents for the remainder of the day and night. We had a significant amount of rain and the accompanying wind made it difficult to keep the moisture at bay. This is when you wish you had downloaded more media options to your phone to fill your time. But the rain began to retreat the following morning allowing us to pack up our wet gear and proceed south.

We were highly encouraged by the sight of blue skies but were were in for a weather mixed day which would include difficult stream crossing thanks to the overnight rain. (Stream Crossing Video later in the Post)

The weather bounced between a windy rain in our face to beautiful sunny breakouts. We were now hiking on the overland trail but needed to return to the beach at about the 5.5 mile mark. This turned out to be a bit precarious due to the recent rain. You have about a 20 foot drop down a steep eroding gully. Bryce ended up in surf slide down complete with a spill at the end, but no injury.

We were optimistic coming out of the tidal zone with beautiful sunbreaks but the weather report warned of another storm.

We wanted to venture past Spanish Flat, maybe down to Big Flat, but the rain and the wind were returning so we concluded that the wind breaks at Spanish Flat would be the better choice. We set up camp and had enough time to hike down to Kinsey Creek.

This was a much better evening since we weren’t forced into our tents until the sun went down, but then we were in for another night of heavier winds with rain. The next morning better weather complete with rainbows offered great motivation for our return north.

The hike back past the tidal zone was just as interesting as the hike in. Rain, wind and sun made for an eventful day. Streams were flowing as high as ever which made for some exciting crossings. (Documented in video below)

We decided we were going to camp somewhere near Mattole this night in preparation to head out from the LCT on Sunday morning.

After getting through the tidal zone the search for an acceptable campsite began. The problem with the stretch around the Punta Gorda Lighthouse is the presence of sea lions and free range cattle. We also were bucking a head wind which we were really hoping to get some shelter from.

Once past the initial tidal zone we were competing with cattle for the only decent campsites. We ended up clearing cow patties so we could camp.

Our final night on the LCT was beautiful and dry. We hiked out the next morning with plans for some frisbee golf, brewpub nourishment and to search for a campground for the the evening.

My third Lost Coast Trail Trek was all that I could have hoped for. Bryce has become a trusted companion and the addition of Jeff was a benefit to all. My old body held up great and I can validate that my Oculus Supernatural exercise paid great dividends for my core and upper body. My knees were a bit sore but what the heck, first hike in 2021 was awesome.

Driving out from Mattole through Petrolia and over to Ferndale was as scenic as ever, complete with spotting the pickup in the tree.

We went on to play a round of Disc Golf in the Redwoods at Humboldt State University. Had an amazing dinner at the Mad River Brewery and got a great campsite at Prairie Creek Redwoods State Park. However, we should have checked the road conditions, because getting back to Oregon from this location turned out to be quite an adventure with Hwy 101 closed just to the north and then CA 96 closed near Happy Camp. So we ended up having to take CA 299 over to Redding, CA to then drive north via Hwy 5.

December of 2015 where I nearly did not survive: I Lost to the Lost Coast

The Lost Coast Trail in northern California is one of the few Coastal Wilderness treks in the US. The 25 mile north section from Mattole Beach to Shelter Cove is a challenge because of a couple 4+ mile low tide only passages.

So other then working out your logistics correctly it is a fairly straightforward backpacking trek. Of course in December of 2015 I did not get my logistics correct and mother nature hit me with an epic storm. I failed in my first attempt at the Lost Coast which is documented in my most read trip report “I lost to the Lost Coast Trail“. Retuning to conquer it allowed me to remember the pain and rejoice in the new success.

I really appreciated Bryce, an experienced wilderness survivalist, joining me for my return to the Lost Coast. With 2 cars you can pull off your own shuttle between Shelter Cove and Mattole, however, it is brutal. I think I would rather just do an out and back from Mattole and avoid the Shelter Cove roads. After way too much driving we did end up about a mile down the coast from Mattole and had an excellent first night on the Lost Coast.

The second day included a visit to Punta Gorda Light House which also is home to a rather large population of Elephant Seals.

Low tide was at 4 pm so we could take our time working through the 1st hazard zone for our second night at Spanish Flat. Punta Gorda was holding up well but the our treat was being able to pass by a couple hundred Elephant Seals. Calving season had just ended and a team of researchers from Humboldt State University were trying to gather data and tag the 102 new seal pups. I think we saw Elephant Seals for about 2 miles.

This up close view of the elephant seals was awesome but now we needed to put in some miles to get through the first 4 mile hazard zone. 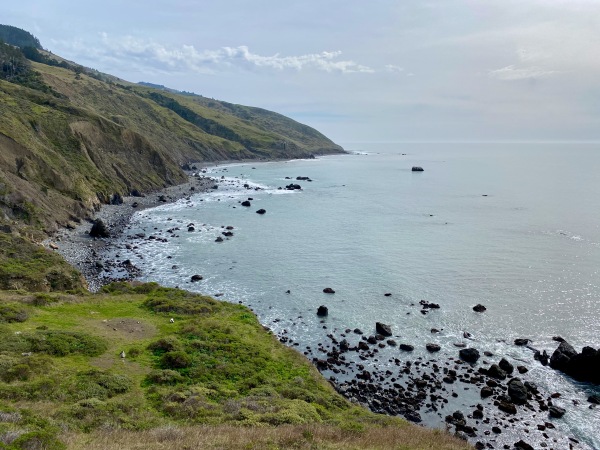 This was also when I started recalling my bad memories from my first attempt at the Lost Coast. But this time I did not have to jump in the ocean so the hike to Spanish Flat was quite enjoyable. Our only challenge for getting past the low tide zone was to wait for the tide to go out and then time the waves at a few of the points.

Wait for the waves to subside

Once you are beyond the first hazard zone you are greeted with a nice long trail up on a grass shelf to get you to Spanish Flat.

Past the 1st Hazard Zone

Instead of having to stop and dry out I got to enjoy the beautiful scenery. We were able to camp at the same spot I had ridden out the first day of a storm back in 2015.

This day was all about being perfect. Fairly warm, plenty of dry firewood and the formation of an excellent sunset.

The sunset was awesome. The next morning was beautiful as I said my goodbyes to the Spanish Ridge that I had to climb over to seek shelter from the typhoon in 2015.

The remaining hike was new terrain for me. I took this ocean video before leaving.

Now on too Big Flat and the 2nd high tide hazard zone. 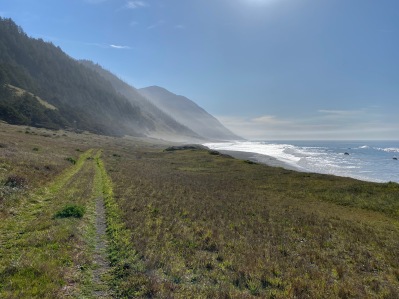 I think the temperature was 60 and we were hiking in shorts and it was February, this was as good as it gets.

Jane from the San Francisco area

About this time we met Jane who we ended up hiking with to our next campsite that night. We come into the Big Flat area and realize that a fair number of California Surfers had either hiked in or flown in via private planes to surf this area. Some had been there for many days. One dad said it was a constant task to feed his three teenage boys who were out surfing when we passed by. Check it out. 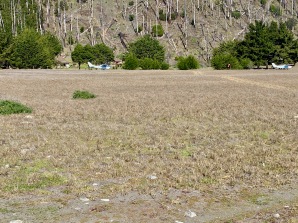 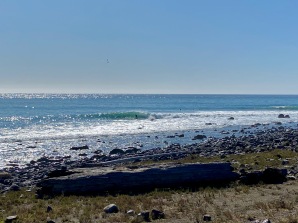 Soon after Big Flat through Miller Flat we entered into the 2nd hazard zone, but I did not feel that it was as difficult as the 1st. 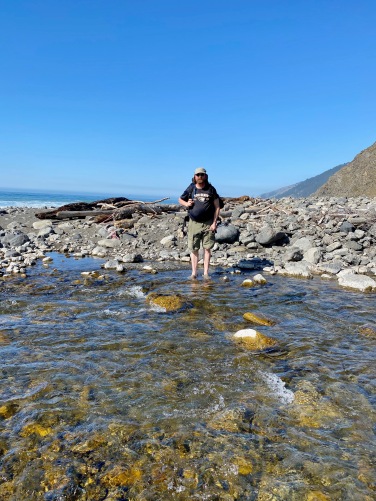 Good opportunity to refresh our feet 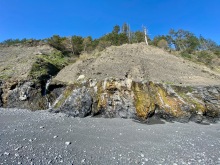 Plus we didn’t actually make it all the way through as we decided to camp at Buck Creek which would require that we get an early start the next morning to finish the 2nd hazard area. 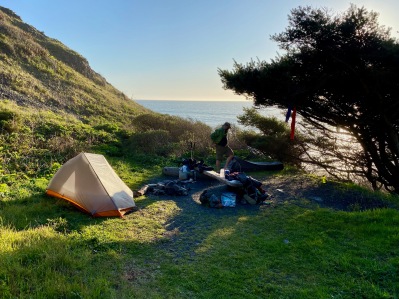 Sunset with no Clouds

We had about 6 miles to hike out to Shelter Cove, but it did include some great scenery. 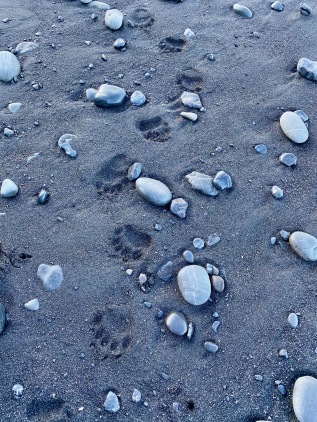 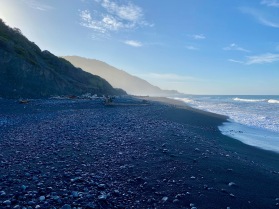 Black Sands Beach was very nice and empty on a Saturday morning. 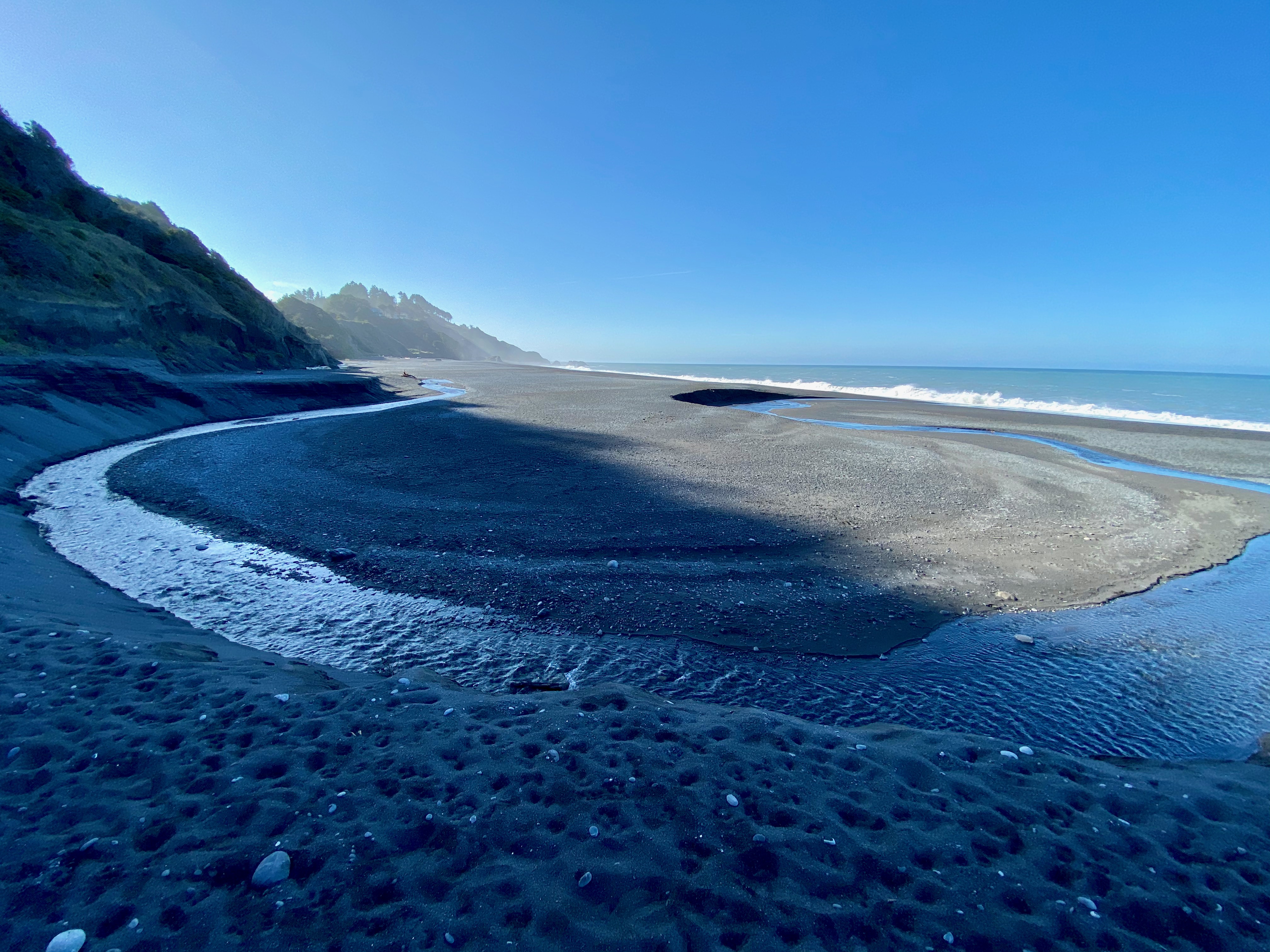 We said goodbye to the Lost Coast Trail from the Black Sands Trailhead.

Then the grueling shuttle over to Mattole from Shelter Cove and then up and over the mountain to Ferndale.

Heading over the Mountain to Ferndale

We had brews and fish at the SeaQuake Brewery in Cresent City and then spent a night in Jedediah Smith State Park before driving home to Oregon.