When I saw this article “Windows 3.1 Twenty Years Later” from PC Magazine today, I asked myself, where was I and how did Windows 3.1 influence my life. 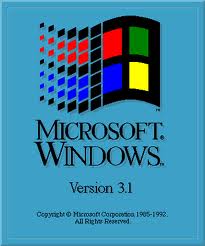 I was working for Hewlett-Packard and the Windows based PC was our standard computing environment. Yes, we were using it to access UNIX and RTE based systems but we were also developing products that relied on Windows. And the hopes for a more stable Windows were very real for us System Engineers. We had been propping up Windows 2.0 then 3.0 with HP’s NewWave, and that computing life was not stable. We had analytical instrumentation workstation software running on Windows that had strict requirements.

Opening multiple windows gave us the false illusion that we were running multiple programs at the same time. No we were just using the windows as placeholders, but Win 3.1 gave us hope. The Windows Registry was born giving us nerds the power over the general users. Screen savers spawned an industry of gimmicky apps that in some ways rivaled todays app store. Our customers were so excited when we would pass along the latest new screen saver apps that we had pulled off some BBS. I guess Win 3.1 also ushered in the Golden Age of Microsoft. We then got Win 3.11 or Windows for Workgroups. Remember how amazing the concept of sharing files between PCs was. We knew that true multi-tasking was on the horizon.

Oh well, that was fun, just felt like sharing those memories.

Serious Backpacker, Grandfather, Volunteer, Advisor, Mentor and still Technologically Aware Greg retired as a technologist who served as a Chief Information Officer in Higher Education at Western Washington University, Missouri University of Science, Technology, George Fox University and the Purdue School of Engineering and Technology at IUPUI. Prior to the IT career in Academia, Greg was a Systems Consultant with Hewlett-Packard. Other early jobs included IT activity in the oil shale and coal mining industries along with owning a computer store in Steamboat Springs, Colorado.
View all posts by ghsmith76 »

Posted on April 16, 2012, in Microsoft. Bookmark the permalink. Leave a comment.