I Lost to the Lost Coast

Ready for the Lost Coast

I headed into my Lost Coast Trail backpacking trip during the first week of December 2015 confident that I would accomplish my goal to hike from Mattole Trailhead to Shelter Cove and return. I knew it was going to rain a couple of days, but the forecast called for 10 mph winds. I also knew I had some bad timing for when the low tides occurred during the first part of the week. But I did not dig deep enough into this data to be properly prepared for what was ahead.

The drive down to northern California through the Redwoods was great, my car loves roads like the Redwood Highway. I visited the BLM office in Arcata first thing Monday morning to get my waterproof map, so with that map also on my iPhone equipped to use GPS, I was well prepared for navigation.

The low tide on Monday was not going to allow me to get past the first high tide hazard stretch so I had a leisurely hike past a herd of cattle to end up camping next to the Punta Gorda Lighthouse. It was a beautiful evening as I overlooked a beach full of seals.

Low tide on Tuesday was at 9:33 am at 3.2 feet, so I entered the beginning of this 4 mile stretch before 9:00 am. Based on most reports I had read this stretch was not going to be a problem even if you were a few hours on either side of low tide. Unfortunately, I did not consider the actual height of the low tide. The trek through this segment was tough even without navigating the dangerous rock points of which there are about 5 that are really challenging. Some you can climb up and over, but the rocks were really slippery probably due to the higher then normal waves preceding the approaching storm. So I worked my butt off hiking over the beds of football size boulders. As I neared the last few hazard spots it seemed like it was far more dangerous then it should have been. 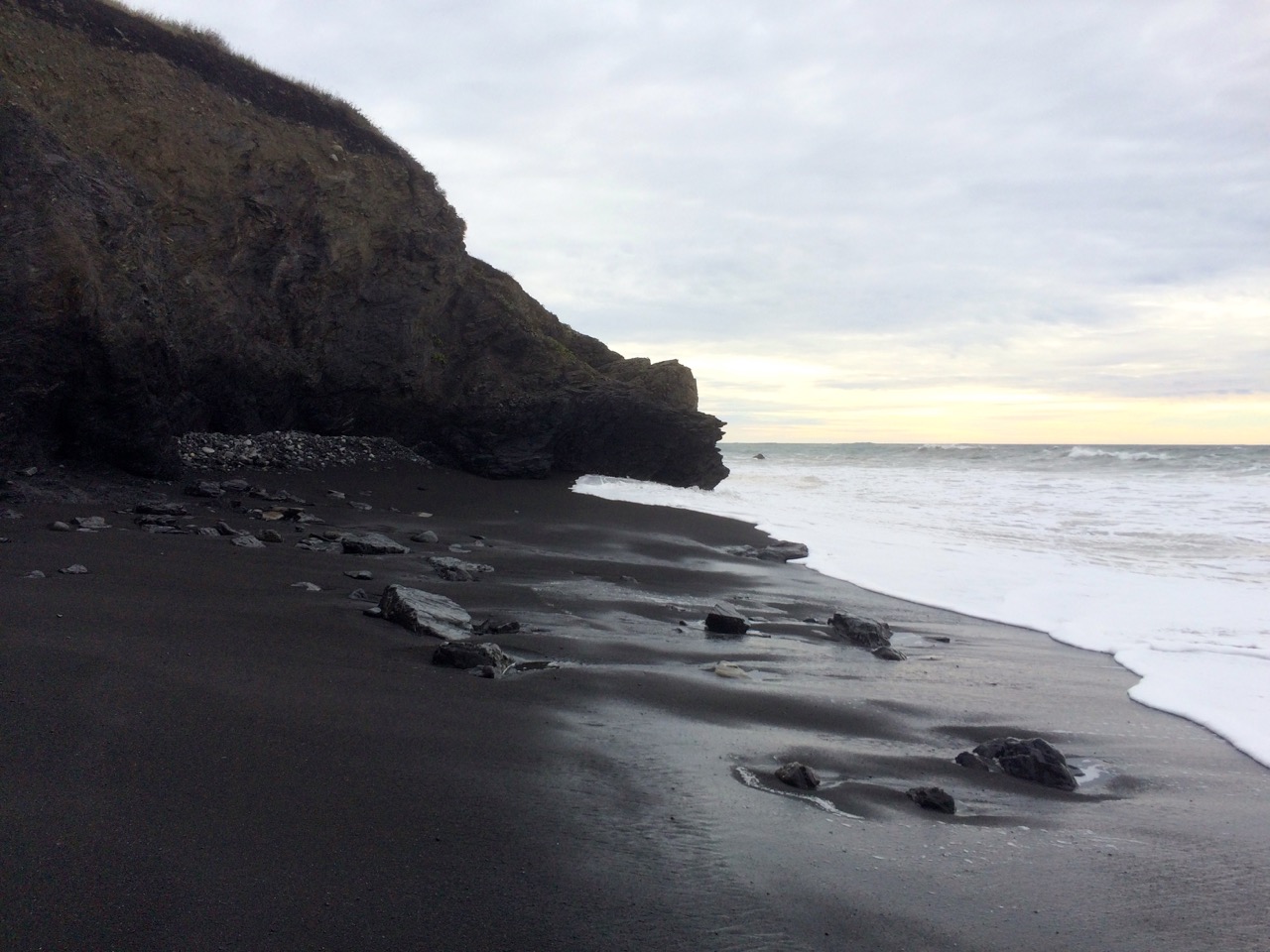 Then the last point before Spanish Flat nearly did me in. It was a point where you had to go between a large rock as the waves were crashing, however, it was all under water. As I tried to see around the corner to determine what I was up against I caught a full face on wave that nearly pulled me into the ocean. At that point I couldn’t worry about waiting for the best wave timing so I jumped into waist deep water and made it around. I was soaked but relieved to have survived.

I stopped at Spanish Flat, put on dry clothes and checked the tide tables to discover that the low tides that I was experiencing were the highest low tides of the year. That explained things, but now I was concerned about the next day’s stretch of tide hazardous coast with another 3.2 foot low tide, not to mention my concern about coming back from Shelter Cove.

I decided to camp at a nice beach fortress just below Spanish Ridge. The winds were gaining strength which was good for drying out but it was also a bit foreboding knowing that rain was on the way. Yep, the rain started at sundown and the wind just kept getting stronger. It was time to reevaluate whether I should press on to Shelter Cove.

I knew it was going to rain all day so I decided to stay put through Wednesday with plans to head back to Mattole by hiking up the Spanish Ridge Trail over to the Cooksie Spur Trail on Thursday. This was a nice campsite and I was able to get out a few times during rain breaks. This video will give you an idea about how I spent Wednesday.

I was up before sunrise Thursday morning with my backpack ready to go, just needed to take down the tent. I was so happy that it had not been raining for a few hours and the tent was dry. Unfortunately all hell broke loose at sunrise. The rain and the wind hit what I would call typhoon force. My line holding my tent fly broke, my tent stakes were being uprooted, water was rushing in so I had to go. Taking down a tent in gale force winds is challenging but I captured everything, but somehow lost my reading glasses. Of course I was instantly soaked but my Marmot Gore-Tex jacket was taking care of me.

I decided to go straight up the side of Spanish Ridge and intersect with the trail which worked out fine thanks to the map I had with GPS location on my iPhone. The wind was blowing from the south so it was mostly going to be at my back.

My goal was to climb the 2400 foot verticle of the Spanish Ridge Trail and then take the Cooksie Spur Trail over to Cooksie Creek since I would need water.

Well half way up the climb (see blue dot on map) I was realizing that this wind was a real problem. As it whipped up the slopes it must have gained even more power, so much so that I was barely able to stand up. Then I really got hit, actually blown off my feet, and I was a 250 lb object. I was totally exposed at this point, no trees or large rocks to shelter behind, so I laid face down next to a small rock that gave my head a little relief. I was pinned down about 45 minutes with the wind occasionally lifting me when it hit between my body and backpack. Oh yes, and the rain was as hard as you could imagine. So here I am face down trying not to be blown off the mountain and I’m getting cold. The night before I had listened to a chapter in Lawton Grinter’s book “I Hike” about his experience with hypothermia, so I knew that the shivering, loss of feeling in my hands and feet and the desire to burrow were typical of hypothermia. What was a bit fascinating from being in this predicament was getting a taste of what it may be like to face the real possibility of death so my conversation with God was with great urgency.

Of course the human spirit doesn’t just give up, I had to do something because my current situation was hopeless. I fought to stand which was really hard because my legs were not working as I would have liked. Something told me that I needed to climb out of this, however, I had no way of knowing what was ahead, but my GPS map at least assured me that I was on track. I walked with my back to the wind using my trekking poles as braces to counter the force and I made it to an area where a small cornice offered some relief from the heavy wind. At this point I knew I had to warm up so I pulled out a wool shirt to add a layer under my rain jacket. Buttoning that shirt with my cold fingers was far more challenging than I could have imagined. However, this accomplishment seemed to give me new motivation to press on at all costs. And pressing on was brutal. There were a few sections where the wind was at my back so I used it to essentially fly up the mountain, however, coming to a stop was never pretty. Then my backpack cover blew loose but was still attached to my backpack creating a spinnaker type sail that dragged me for 20 feet. In between my attempts to move forward I spent more time on my face trying to regroup. Overall it took me about 3 hours to travel about a mile through the really bad section of the ridge. 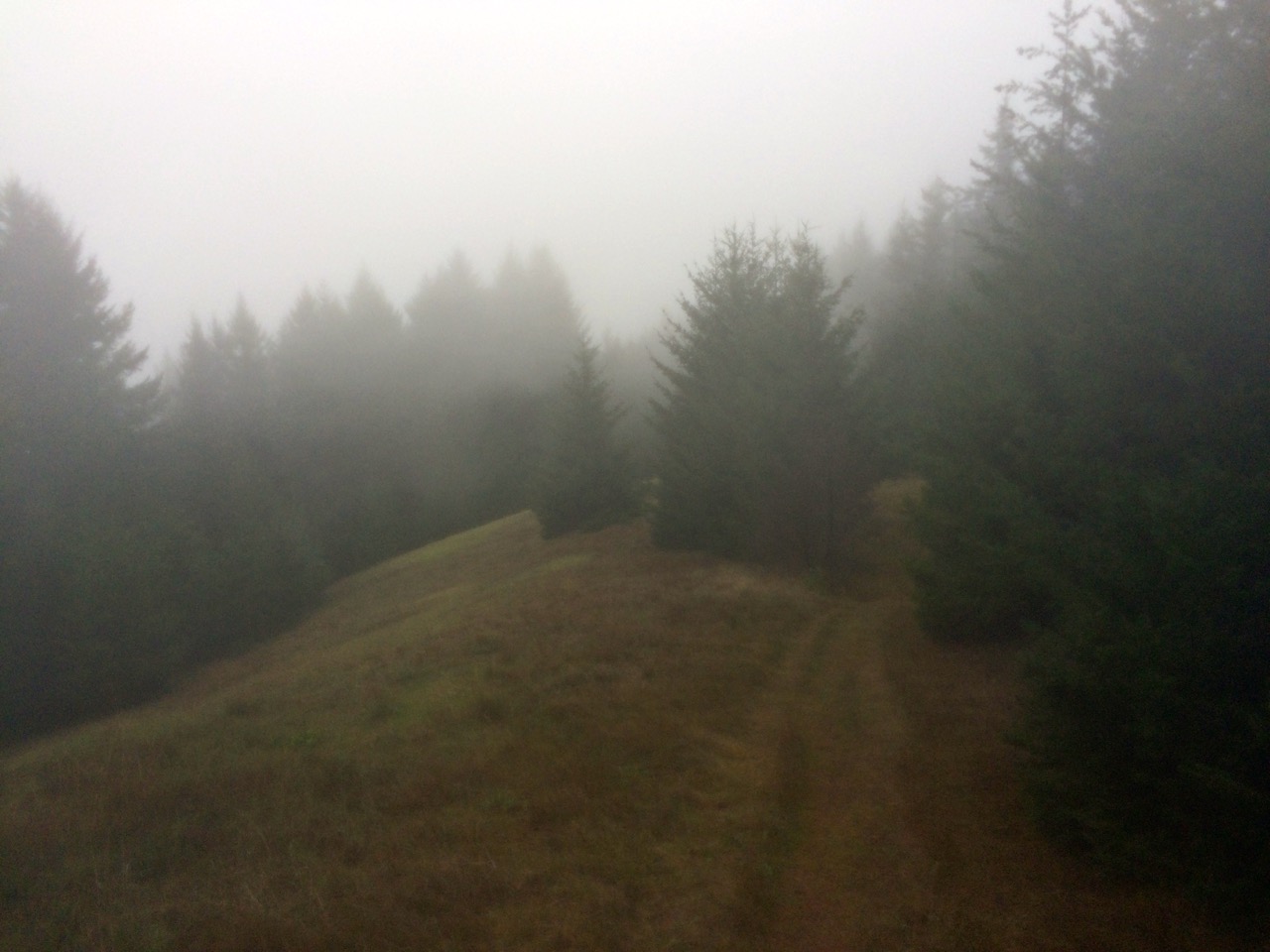 Of course I did finally make it to the top and when I got off the Spanish Ridge Trail and onto the much calmer Cooksie Spur Trail I was singing praise to God for allowing me to live. From the looks of the map I knew that the Cooksie Trail was also going to present an exposed ridgeline so I opted for the best tree sheltered spot to pitch my tent with the goal to get into my sleeping bag and warm up. That evening was not great but compared to the effort to get there it was wonderful. I was very content to make it through the night with just 13 ounces of water. I had dry clothes, mostly wool, so I did eventually warm up.

The forecast for Friday was sunshine which held true, so I set out with the need to get to Cooksie Creek for water. I also decided that I had had enough of the Lost Coast and I really wanted to hike back to my car with dreams of a good meal and warm bed. But the hike out Friday turned out to be a lot tougher than I expected. Thank God for my GPS map locator since finding the trail to the creek was rather confusing. For some reason I thought that the trail was going to follow the creek back to the coast, but as I kept examining my map I realized I must cross the creek and then climb 650 feet and another 2 miles just to get back to the coast.

Well of course the creek was swollen from all the rain so crossing it created some anxiety trying to crawl over trees and fight the current. Unfortunately I lost my backpack rain cover as I was crawling over a log for part of the crossing. I was really bummed about the simple climb because my legs were dead tired, but the weather was great and the motivation to end this trip lifted my effort. This was a typical view as I returned to the coast.

The first beach segment on this final coastal leg required navigating a few difficult points but it was at the (high) low tide. Surprisingly I ran into a single woman just entering this difficult stretch and it was an hour after low tide. I warned her that she might want to reconsider trying to make it to Spanish Flat, and I’m not sure what she decided. The rest of the hike out was not dangerous but it was exhausting.

Final Stretch with the sun going down

Walking on loose sand with tired legs was tough, but the motivation was strong and the sunset was beautiful.

When I finally got to my car at sundown (long day) I was met with yet another disappointment. I noticed that my gas cover was ripped open and then I noticed that all of my windshield wiper blades had been stolen. This was just so rude. Luckily I intentionally had less than half a tank which probably meant they didn’t get any gas. However, if it had been raining that would have been one dangerous drive back to Ferndale. I did get to Ferndale and I had possibly the greatest NY Strip Steak ever and a much needed warm bed.

Note: I returned 4 years later in February of 2020 to Conquer the Lost Coast Trail