I guess I am a curious geek, I had to checkout Google Glass the same way I had to have an Apple II in 1979 and an iPhone when they came out. Of course I justified the $1500 Glass price tag because many at the university were itching to get their hands on them as well. I have been exploring Glass for 4 days now and I have concluded that this wearable technology is going to be Big. Not Big because of efficiency or usefulness. Big because they are just really cool.

First to catch everyone up on what Google Glass is – checkout this ABC Technology Video by Joanna Stern.

Unlike the Cyborg like appearance Google Glass generated for her wearing them in the city, I have yet to be asked about them after numerous encounters with strangers in Rolla, MO. However, it has been 6 months since Joanna first shocked people with them. The other side of that coin is that I was pleasantly surprised to discover that they feel fairly normal and do not interfere with your normal vision. You can easily forget you have them on until you want to take photo or ask Google for information.

Google Glass is definitely in Beta testing mode. If you are expecting lot’s of administrative instructions forget it. Your greatest source for answers is the heavily trafficked user forums or as Google refers to them as Explorers Community. A real downside right now is the lack of an IOS app to allow you to connect with your iPhone or iPad but that battle will be waged later when Glass goes public. Since I can’t tether my Glass to an Android Phone I walk around with my AT&T MiFi to provide Internet access, what a geek.

My first intentional public display of Glass came last night for our IT Christmas party, which by the way was great. Santa couldn’t make it but Mrs Claus and an Elf showed up to pass out gifts to the children. So I had a captured audience of IT folks and their families. First observation was that my older staff were more reluctant to checkout the Glass then the younger ones. The kids were the most interesting. It seemed like the teenagers were interested but it did not click for them as quickly as it did for the preteens. 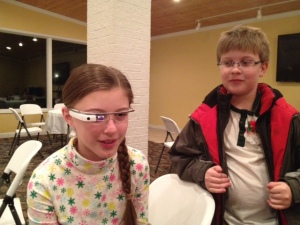 Kids from say 6-12 immediately got it and you could see their minds race with imagination. Notice photo of brother waiting on his sister for a try. He quickly figured out how to ask Google about “Hunger Games”. I was told that the boy never stopped talking about the Glass the rest of the evening and he couldn’t wait to tell his teacher the next day.

I will continue to play with Glass through the Holiday’s but will then start loaning them out to the growing list of Geek volunteers. The bottom line is that there will be new battles over control of wearable technology but market share of mobile devices will be important. Get ready for an Apple Google clash over Glasses.